With pouty lips, we loaded our packs into the Fiat and traded the tranquility of Tuscany for Italy’s capital and largest city, Rome. Returning the rental car meant navigating the absolute insanity that is driving in Rome and because the car was in my name, I was automatically awarded the task of pilot with Ted as navigator/ co-pilot. Together, we learned very quickly that it was “every car/scooter/pedestrian for himself” so in a matter of minutes I too was driving all crazy, which actually made things easier- -go figure. Scooters and cars alike treat stop signs, lights, and road lines as gentle suggestions but ultimately do whatever the hell they feel like. Chaos.

Once that nightmare was over and we made it out unscathed, we checked into our AirBnB just outside the main city center in a neighborhood called Garbatella. Once settled, we set off for food and found an amazing slice of paradise called “Eataly”. It’s basically a huge Italian food hall/ marketplace/ farmers market with fresh, local food- -a redeeming quality of Rome, really. Over the course of our stay, we ate or shopped there for groceries about 4 times and I’m #sorryimnotsorry. It prompted me to see if something like that existed in SF and it turns out there’s a place called “The Market” as of late last year. Has anyone been there?! If so, leave a comment and tell me how it is!! I want to go to there!

Just ONE of the pasta aisles.. 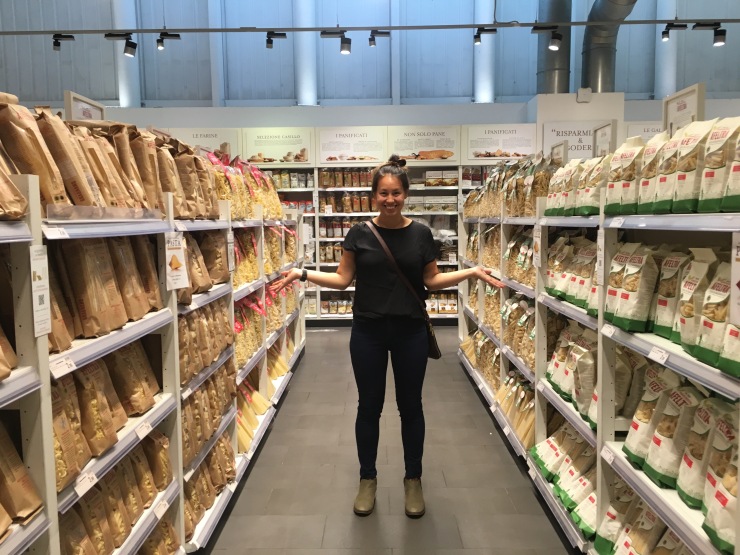 Our first full day in Rome was spent getting a lay of the land with several free walking tours. It was miserably hot and humid (refer to Ted’s graph in the previous post to guess how I fared), but in all, we saw the main sights in one day which allowed us to revisit our favorites in subsequent days. It’s true that Rome is a living museum, with incredible history and stories around every corner. When in Rome (ha!), I highly recommend joining the free walking tours.

I briefly visited 7 years ago when Haley and I did our 2009 Eurotrip but with a restricted schedule and budget, we mostly walked around without getting a “formal” lesson on Rome’s history. This time, Ted and I switched things up by joining a small paid group tour through the Colosseum and Roman Forum which really added color and context to the amazingly old piles of marble and columns everywhere. It was raining to start, which was a bummer, but cleared up once we reached the open aired Roman Forum. It’s so cool how well some structures have stood the test of time, like original stone streets, original marble, copper doors, whole buildings, etc. Honestly, more of Ancient Rome would be with us today if the Romans hadn’t pillaged many of the buildings during the Dark Ages and Renaissance. For example, the Colosseum is about half of its original mass because the marble and iron pins that made up its facade were used to build other structures around Rome, including the Vatican buildings. Rome also makes a point to preserve and maintain, but not restore ancient ruins. On that note, we learned that the budget for historical preservation is pretty much non-existent, and is funded by private companies (what the hell, Italian government!?). For example, the Colosseum is about to undergo a cleaning inside to keep the marble in good condition and reveal its natural white color but the shoe company, Tod’s, is completely picking up the $34 million tab. Fendi just completed a $4 million preservation effort on the Trevi Fountain, and there are many other examples of this around town. If you’re interested, read more and develop your own opinion about private sponsorship of National monuments here. 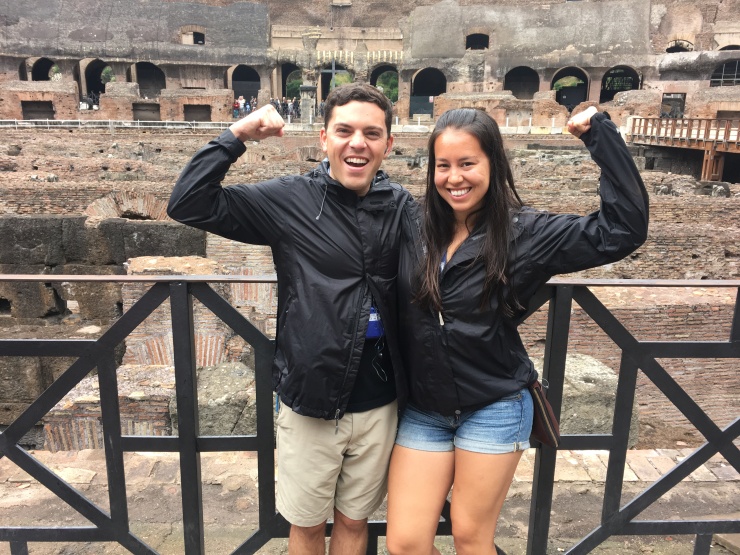 Parts of the Roman Forum: 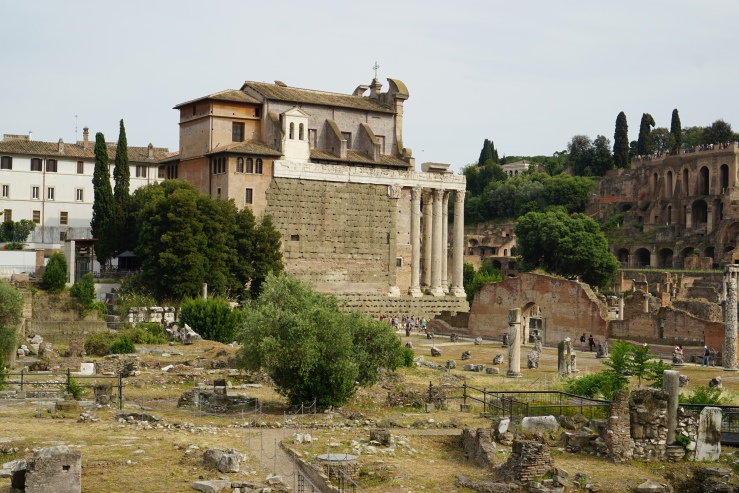 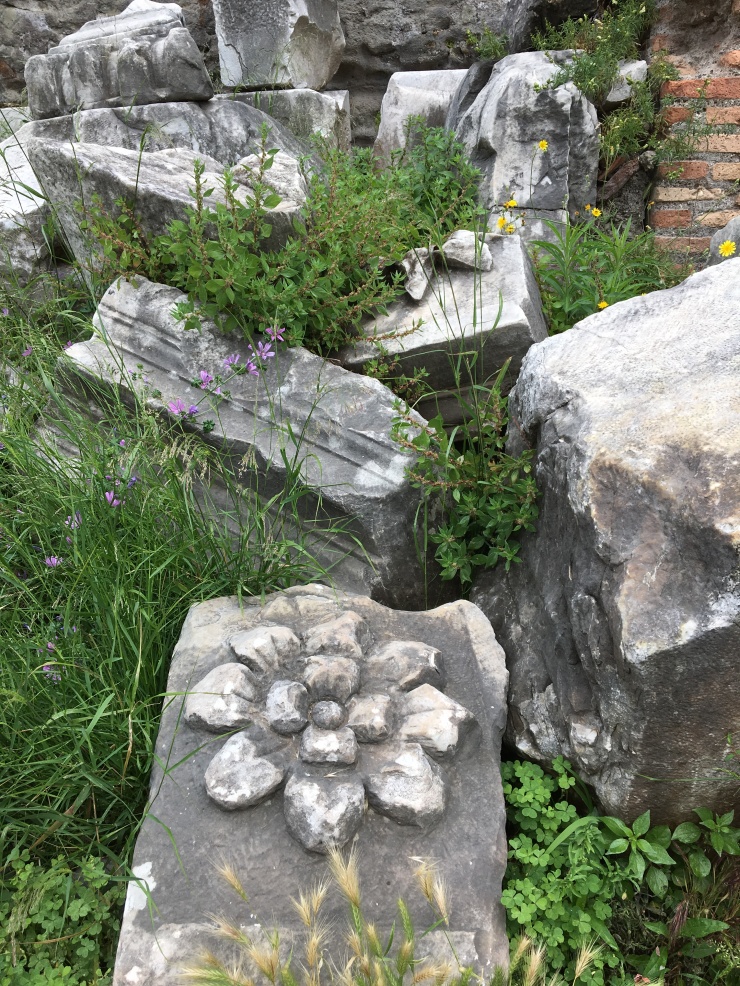 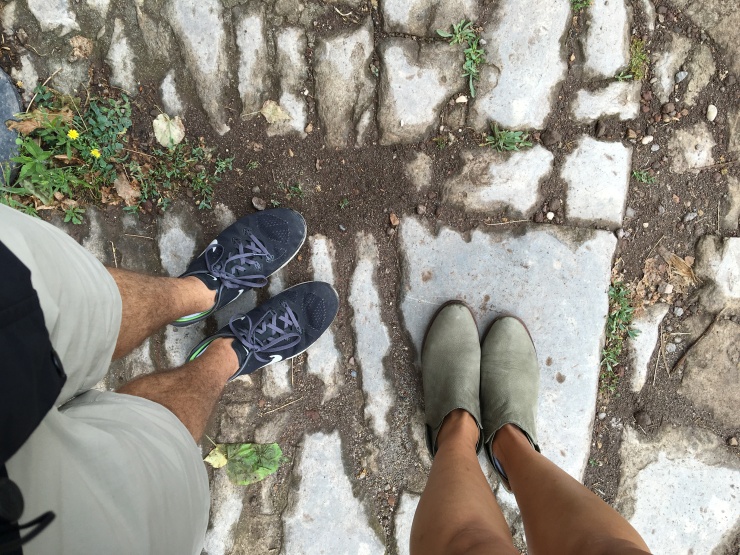 Original copper door, with the same locks, etc. Oxidized to green over time. 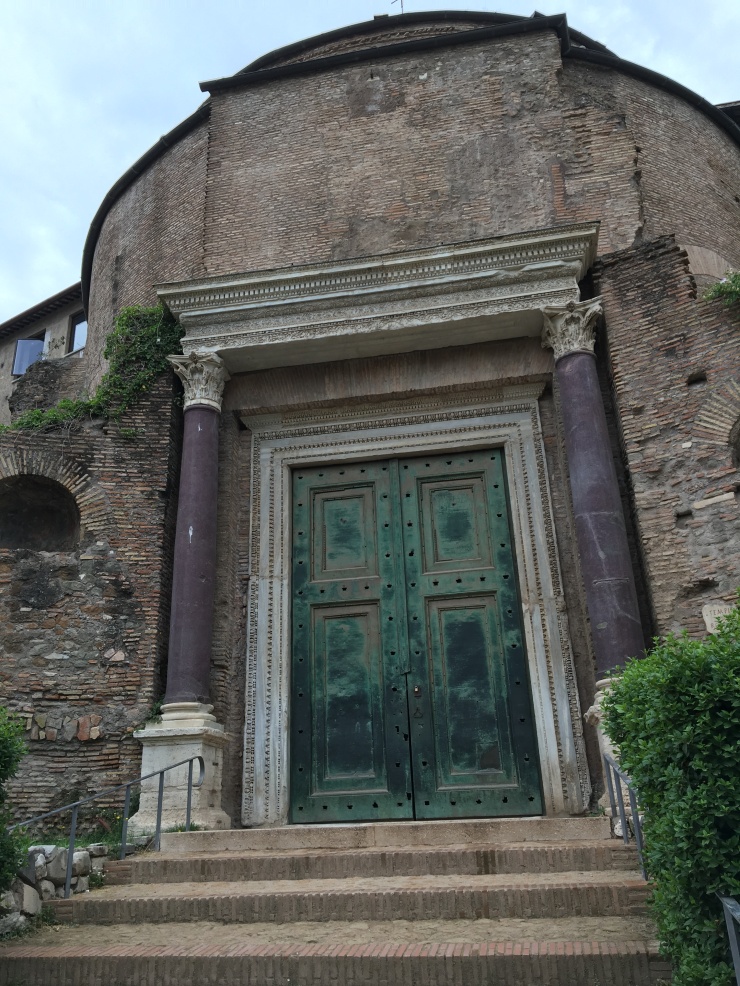 #shouldersinning outside of the Vatican 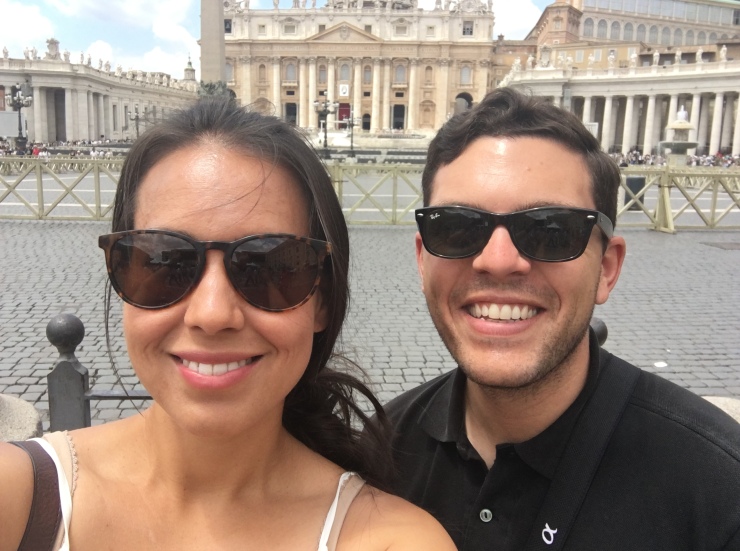 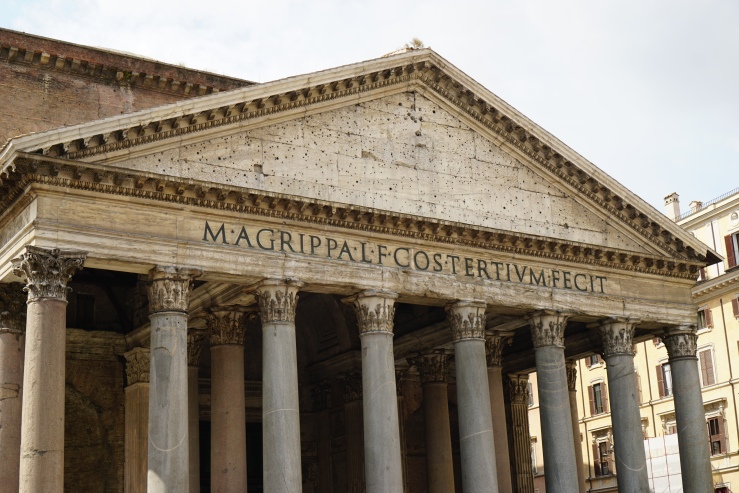 A horse pet me outside of the Pantheon. My first real human-horse contact since we left home. 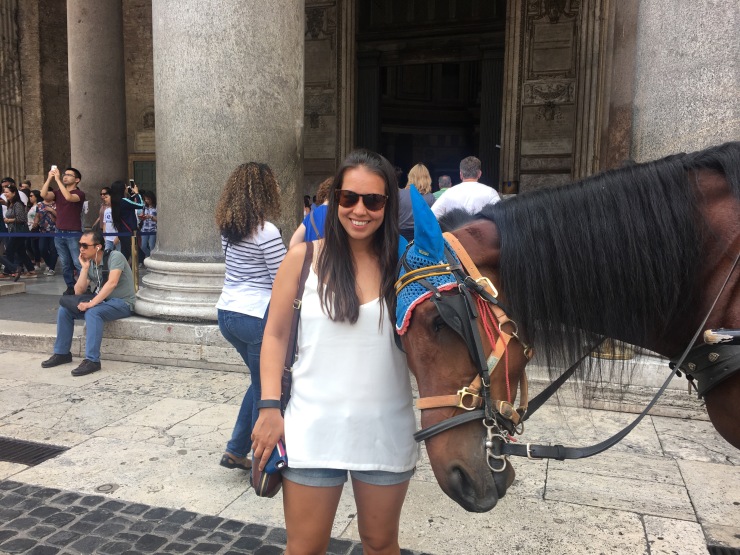 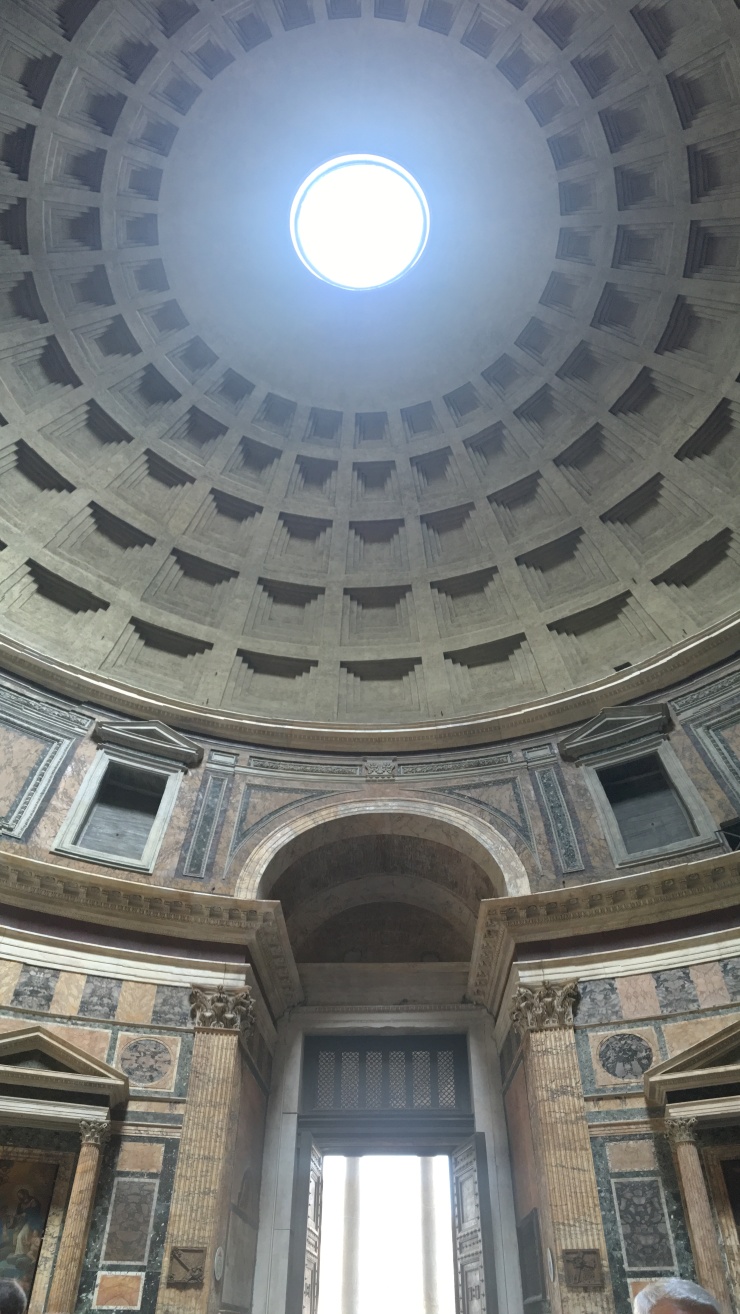 Salami, or marble inside the Pantheon? (ammiright?!) 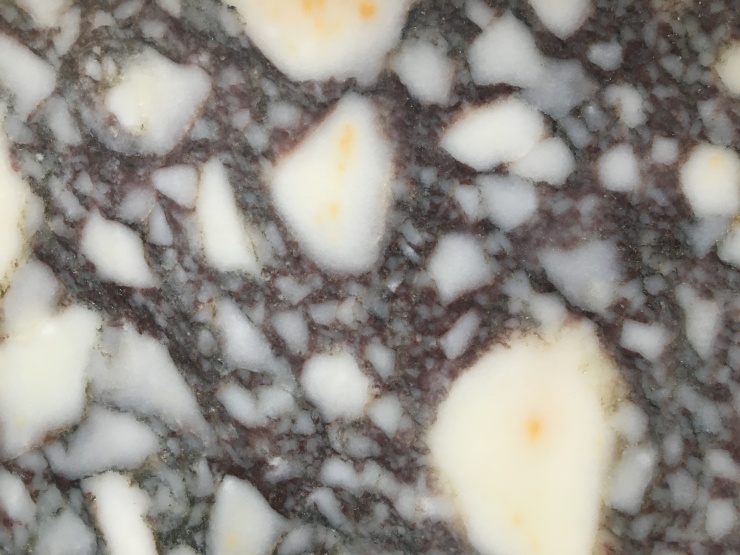 We unexpectedly joined the Roma Pride celebration! It was SO awesome seeing this in the capital of the Catholic Church. Sadly, just one day before Orlando 😦

We visited the Vatican museum which was a new experience for both of us. I didn’t have a strong desire to go, but Ted did and I’m really glad he convinced me to check it out. The Sistine Chapel and Michelangelo’s fresco ceiling really is AMAZING, but it takes time to fully appreciate. We just walked in and looked around by ourselves and I was moderately impressed, but then I started eavesdropping on a tour guide next to us and he pointed out one thing that changed the whole thing for me: he pointed out its 3D nature by comparing the wall panels to the ceiling and my whole perspective changed. He explained that Michelangelo used a sharper painting style to focus the viewer’s attention on a particular element and a softer style around the peripheral to make it really pop. It’s so true. The figures on the ceiling appear 3D, as if they are laying or perched on top of the painted ceiling. That insight really made that €20 ticket worth it in the end. Sadly, no photos allowed but you can take a free virtual tour of the room here; though seeing it in person is where it’s at.

I’m going to be very honest and say that I found Rome to be an extremely frustrating city. For totally understandable reasons (ancient ruins everywhere), the metro runs a limited route BUT their signage, transportation frequency, and everything else associated with city planning leaves much to be desired. It was also one of the dirtiest cities we visited during our whole trip, which is disappointing considering how much history should be preserved. All in all, Rome was just okay and it ranks pretty low on the live-o-meter.  Its cleanliness issues, constant chaos, and sprawling city give it a 3. I would have given it a 2, but I had some delicious Tiramisu, and that ish was LEGIT.

In a spontaneous decision, we decided to leave Rome and head to Sicily, the home of Ted’s Italian roots (and yummilicious Italian dessert).