Hi folks. Sara is slammed at work so you have me again (Ted) substitute blogging. It’s been about 2 weeks since the last entry, so to quickly bring you up to speed, Sara and I just left Sicily and are in route to Naples Italy, our last full stop on this incredible trip.

Naples lies on the west coast of Italy approximately 150 miles south of Rome.  The city is big – it’s the third largest in Italy after Rome and Milan – and super close to Pompeii, Mt. Vesuvius and the Amalfi Coast.  It also has a reputation for being one of the more scummy cities in Italy, which held somewhat true. Our rationale for visiting was simple: cheap flights. Turkish Airlines offered a low fair service from Naples to San Francisco via Istanbul. It seemed like a great deal but more on that in the Istanbul update.

After departing Palermo, we took a bus to the airport where we again enjoyed the cattle-class Vueling flight service to Rome. From Rome, we caught a train to Naples then walked a short distance to our hotel.  Given all the traveling we’d done, and the relatively few days we’d be spending in Naples, we opted for a hotel vs. another AirBnB just to simplify things.

The first thing you notice about Naples is that scooters rule the roads even more so than other Italian cities. Everyone has one (from 15-year-olds to 80-year-olds) and they all ride like bats out of hell. Many kids meet up in the squares to practice wheelies. Since these scooters are generally underpowered, the kids pile their friends on the back to create a counterweight then gun the tiny engine. I have zero idea how these kids found money to buy these things or fill them with petrol but it sounded like they were running 24 hours a day.

We wanted to combat the stereotypes one hears about Naples but really, it’s pretty seedy.  The magic that seems to emit from the other big Italian cities just wasn’t here. There are nice parts, particularly the pedestrian-only streets like Via Partenope, which hugs the coastline, but overall the city felt dirty and sometimes sketchy.

Interior of a domed shopping center

As we did everywhere we went, we used Tripadvisor to find the top rated inexpensive food in the area. Naples is known for Pizza (including deep fried pizza) and a pastry called sfogliatelle. After the roughly 100 schnitzels I ate in Germany/Austria/Switzerland, my body was not capable of consuming a deep fried pizza. We instead sampled some of Naples’ thin crust pizza, a famous meat ragu at Tandem and of course the sfogliatelle.  The verdict: The pizza is a little underwhelming at first but the flavors develop and you end up appreciating the simplicity and especially the dough. That said, Big Sur Bakery and Vesta both make better pizza than anything we found in Italy. Plus shout out to Round Table, just for the Chibas.  Go California!

On our last night in town we wanted to make the most of Naples, which meant heading back to Via Partenope, the pedestrian-only street along the water. Opposite the water are many cafes and restaurants offering lovely views of the coastline and moored boats. We opted for Muuzzarella Lounge, a cow-themed cafe specializing in mozzarella with a punny name. Perfect for us! We started with an aparativo then Sara had a mozzarella burger and I had a bruschetta platter, which surprisingly came with tuna and was super delicious. 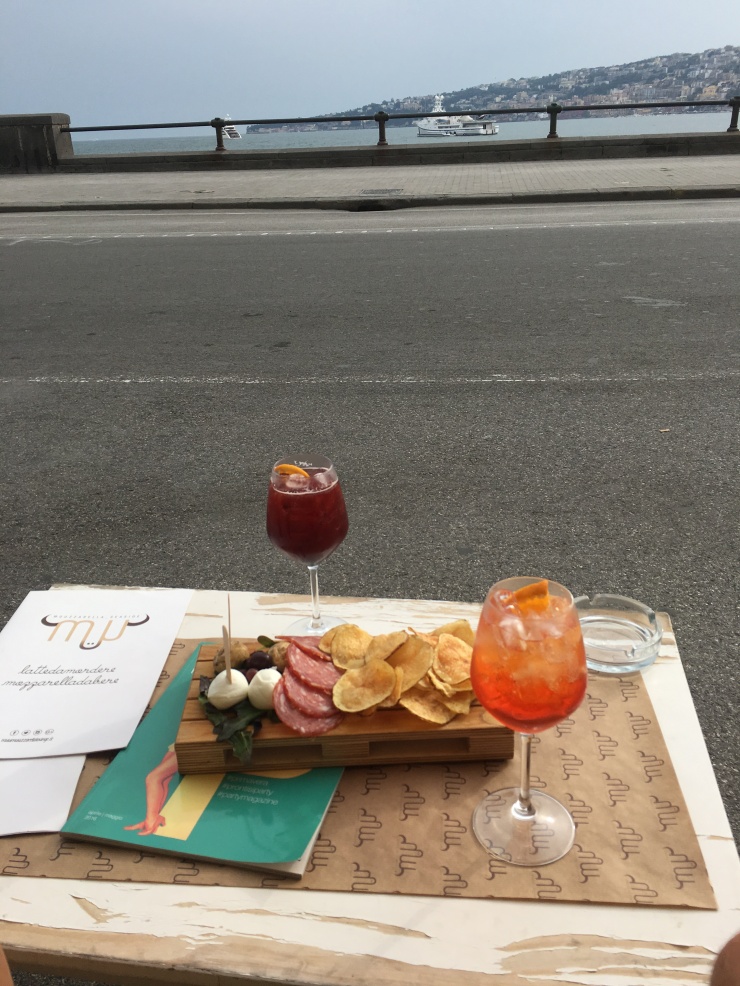 Honey, did you remember to pack the chopper on the boat?

Back at the hotel we packed our bags one final time and bid farewell to our trusty Nikes that cushioned our feet over the 640 miles we walked during the trip. (That’s not a typo: six hundred and forty. We’re pretty proud of that.) 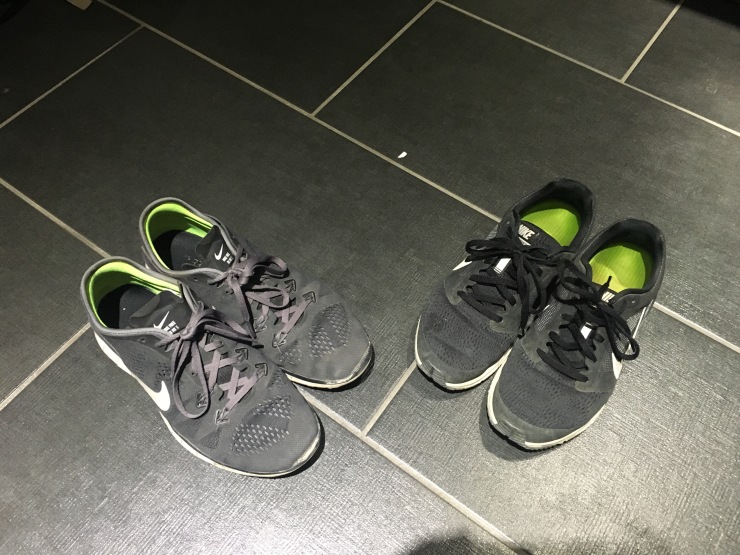 Thank you little guys; you did a stand up job. But you’re filthy and completely worn so we’re leaving you in this hotel hopefully to be retired to a farm in the country with other old sneakers.

Fast forward to 7am the next morning: Our flight leaves in a few hours and all is not well. That tuna bruschetta platter is very, very bad! It promptly leaves my body the way it entered and resigns me to the sad realization that I have food poisoning and about 36 hours of airplane travel and Turkish food tours in front of me. Noooooooooooooo!

The next few hours were not pretty so I’ll spare you the details, except one.  If I were an airport security professional, the sight of a lone, pale and troubled looking man hovering in a dark corner with a large plastic bag and no luggage would inspire a great deal of suspicion.  Apparently, security in Naples thinks otherwise. As said troubled, bag-carrying man I can confirm Police and other staff walked right past me, totally oblivious.

Sara shlepped all our gear through checkin and eventually to the plane on her own. I closed my eyes and thought of better times before the tuna.

To be continued in Istanbul.