backside of Salzburg from the fortress

Though Vienna wasn’t my cup of tea, Salzburg and Hallstatt hit the nail on the head: mountains, lakes, and lederhosen.

We’ve been traveling almost exclusively by train with our Eurail passes. While we were initially hesitant to buy them since our age requires the purchase of [pricier] first class tickets, it’s been a great choice, allowing us to just hop on trains without advanced tickets, etc. Also, if you travel with 2 or more people, you get a 15% discount which helps. Plus, not gunna lie, the first class cabins are a nice upgrade from the congested 2nd class cars.

Salzburg is a quick, relaxing, and beautiful ~2 hour train ride from Vienna, and mountains are visible the moment you exit the train- -awesome! Our AirBnB was a tiny room with a mini kitchenette and although it was mostly adequate for our needs, I wouldn’t give it a full endorsement.

After getting settled, we ventured first to Red Bull’s free Hangar 7 which is a fantastic display of iconic Red Bull achievements, technology, and straight up cool stuff. Being an Austrian company headquartered near Salzburg,  their presence is felt throughout the whole city. It was pretty cool that they’ve been saving all their neat engineering achievements–I hope someone is doing that for Tesla, too. 🙂 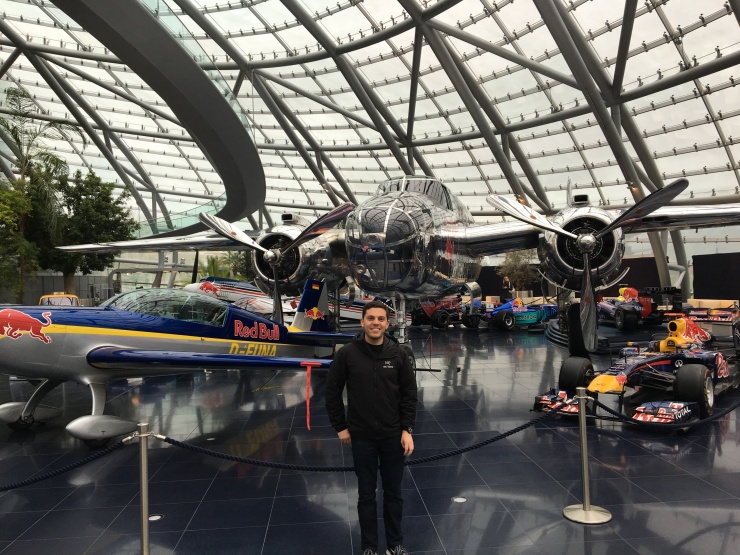 My good friend Stephanie studied in Salzburg and armed us with lots of great recommendations to check out, so we headed over to Augustiner Brau’s beer hall for dinner and drinks. It was my first time in a real beer hall, and I was in awe at how massive it was. There were huge, separate halls depending on if you wanted to smoke, watch sports, just sit and chat/eat/drink, etc. I ordered a Radler (lemonade and beer) and Ted got a Märzen. The food situation was neat, too, with small stalls and vendors in-house. We got some grub, sat with our beers, and felt realllll Austrian. Of course, requisite stein shots (the 2nd pose was Ted’s idea I swear…. I think his Märzen was talking at this point) 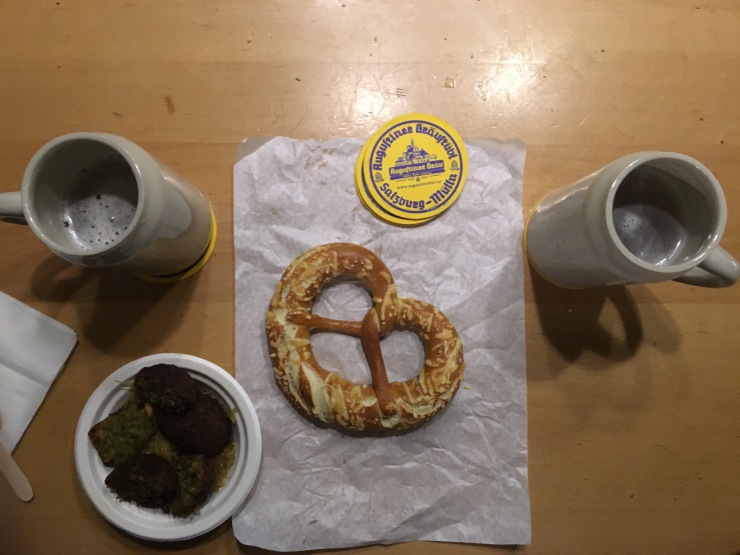 It was really cold when we left the brewery and some wet snow was falling. I was really hoping to wake up to snow the next morning and I got my wish!!

We headed to nearby Berchtesgaden, which is actually in Germany, for the day and went on a Salt Mine tour! It sounds kind of cheesy but it was SO much fun and the weather made the scenery especially beautiful. The tour started kind of like Disneyland in the best possible way– getting dressed in miner’s clothing to protect from the salt and stuff inside and then sitting on a narrow ass moving mineshaft cart and heading deep into the mine. Once we were inside, we learned about the history of salt mining and got to slide down these old school wooden slides which were really fast (these would never fly in America, sadly). The tour technology they used was really neat too, from projection mapping to light shows, etc. If you’re in Salzburg or Munich, do this tour! 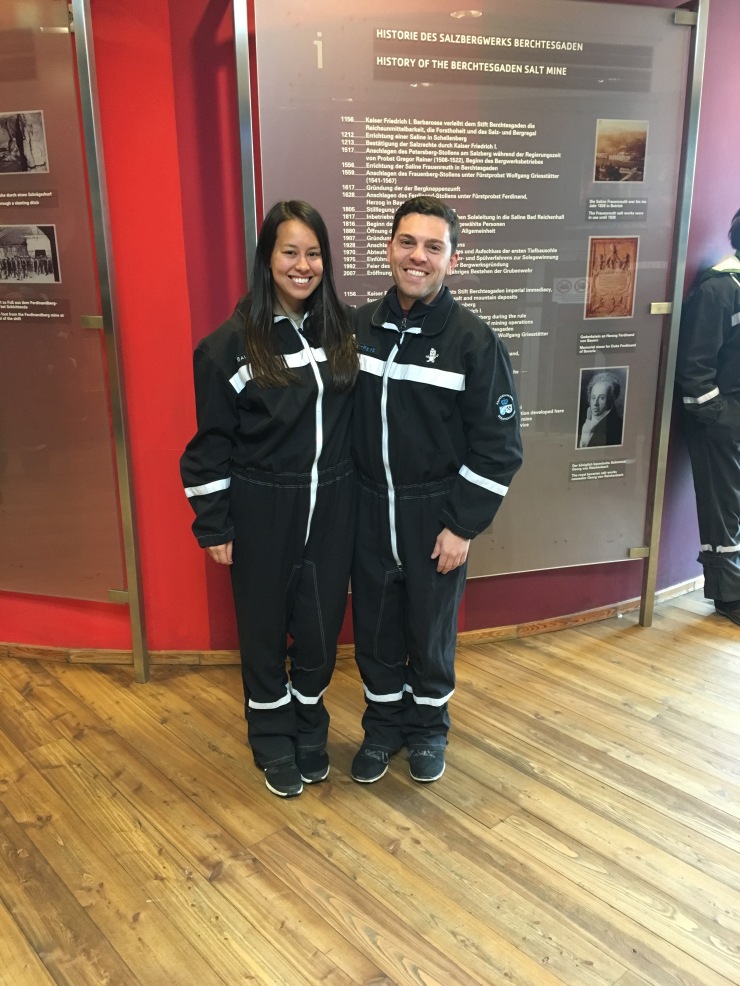 This is how Ted and I slid down the slide, but we were too cheap to buy the 5 Euro photo. Imagine our faces and there you have it. 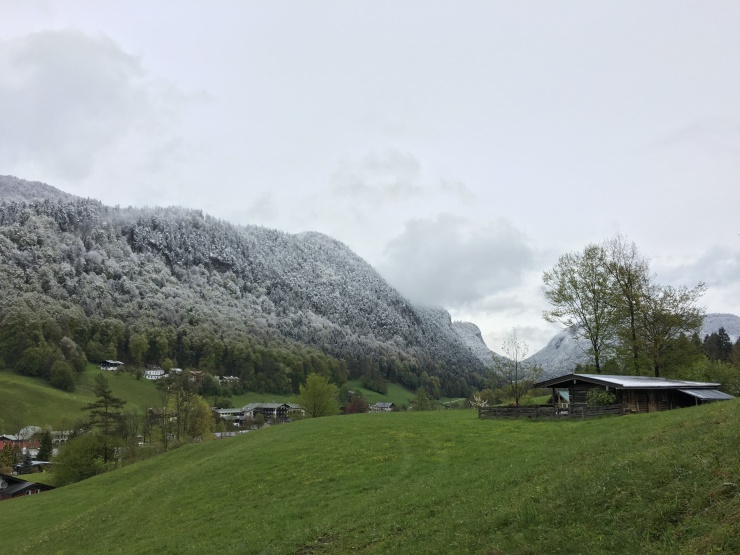 Back in Salzburg, we also enjoyed the city’s fortress which provided spectacular views of the city and surrounding mountains. 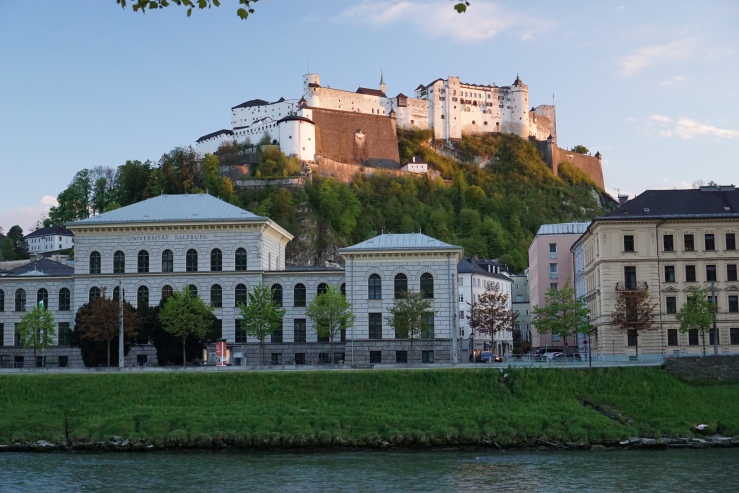 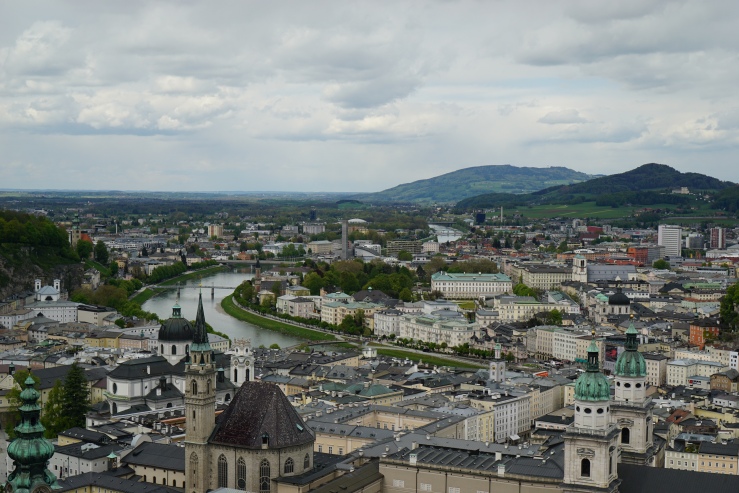 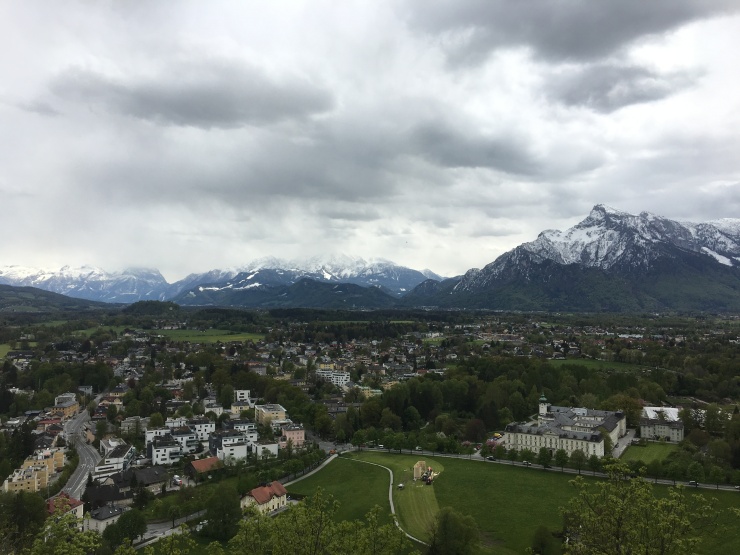 Then, on April 29th, we celebrated Ted’s birthday in what was probably the best way possible. We spent the day in Hallstatt, Austria and had the #bestdayever hiking, laughing, and electric boating around the lake. It was so cold in the days leading up to his bday, so we dressed warmly only to be pleasantly surprised with a hot, sunny day. So hot that a quarter way up the trail, I had to swap clothes and wear Ted’s shirt for our hike (omg so much better).

Hallstatt is a super small town about 2 hours from Salzburg by train. It is basically built into a hillside along a lake, and is simply breathtaking. It’s so adorable that the Chinese have made a full replica town in China. Interestingly enough, 90% of the tourists were Chinese, there to visit the real town after seeing the replica. So. many. selfie. sticks.

We basically had the mountain to ourselves along the [steep but fun] hike, and even in town, it wasn’t crowded. A few photos of the day and more here. 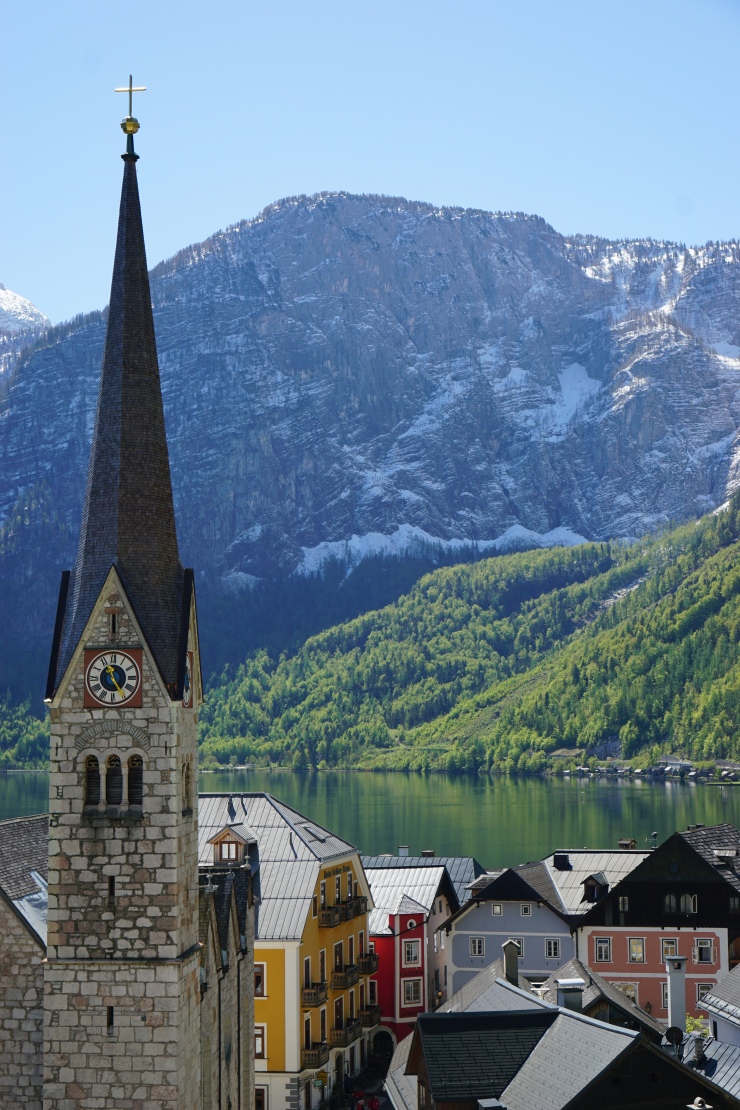 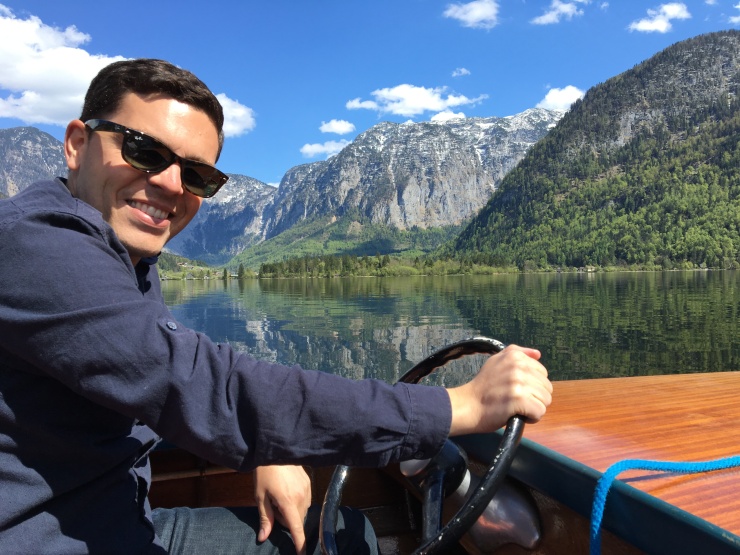 Salzburg is a pretty small town, and housing seems to be at a premium. We had trouble finding an AirBnB for all 6 nights we were there, so for the last 2 nights, we stayed at a hostel. It was Ted’s first hostel experience, and all’s well that ends well I suppose. There were some major setbacks in the personal hygiene department that led to us transferring rooms extremely quickly, but after that it was great. Plus, we were finally able to FaceTime with friends from home, and watch more Sharks playoff hockey (which is even earlier for us since we’re playing Nashville, boo).

Our final day in Salzburg ended with another sunny day and a major hangsesh at the Stiegl brewery. After a brewery tour, we had some great beers and a burger in their garden. My favorite was their elderflower beer (!!!!!!!) that I hope I can find back in the States. For some strange reason, people were also out in traditional Austrian dress (lederhosen and dirndls). We were so confused and thought maybe people get in touch with their roots every Saturday (not judging) but we soon learned that it was due to the first of May festival, which is a big deal in Salzburg.

We also did a day trip to Munich, about 1.5 hours from Salzburg by train. We went to the BMW museum and then hung out all day with some Tesla friends/ colleagues and they really showed us around town! We had the largest lunch of life, promptly followed by 598 steps up and down an old bell tower for a great view of rainy Munich. We strolled through the English garden, stopped for tea, and saw the river surfers of Munich… so neat! We did more strolling, wandering, talking, and ended with some fancy/ delicious drinks. Such a great day and nice to see familiar faces. Thank you Daniel and Paula!!

Sorry for the long post and mostly, for the lack of jokes.

Bone Voyage (omg I can’t wait to get a doggie)!