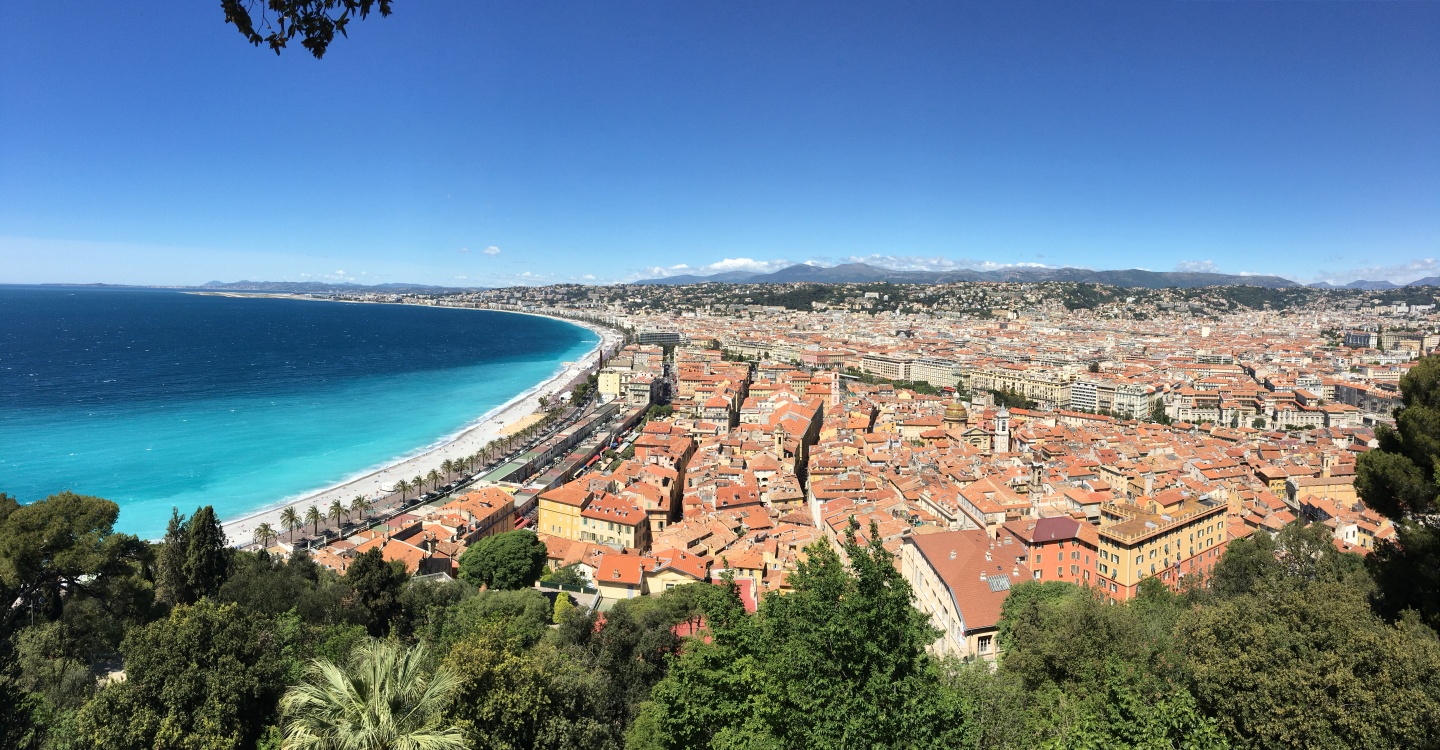 Today is our last full day here in Nice, France! Tomorrow, we move on to Italy, the final country in what seemed like a long list when we set out 3 months ago. In fact, Nice was the first destination we booked for this incredible journey since the Monaco Grand Prix had a known date. Back when we still didn’t know if we’d go through with the whole 3 month version, I remember saying,”Well, at the very least, we’re going to the south of France for the Monaco Grand Prix!” How time flies….

We’re staying in an AirBnB studio which is comfortable, minus some moderate electrical issues causing us to be shocked by running water and metal faucets in the apartment. Several minutes on the Google machine suggested something wasn’t grounded properly (yikes!) and it being France, no one could come look at for 2 days.  Alas, a few missed showers and several hours of electrical work later, “c’est bon”. We’ve cooked most of our meals at “home” since food in Nice isn’t terribly unique and mostly over priced. We did, however, find the best bakery of life, with a particularly delicious baguette and choco-almond croissants.

F1 events didn’t start until a week after we arrived, so we used that time to get settled and explore our environs. Nice is pretty small; you can walk pretty much everywhere if you don’t mind getting some steps in and there is a super cute old town with a daily market that honestly looks like Italy. The Cannes Film Festival was also still going on, so we caught the tail end of that during a day trip. There’s not much to do there unless you have a fancyschmancy pass, but it was good people watching and mega-yacht snooping. Outside of the main movie hall: 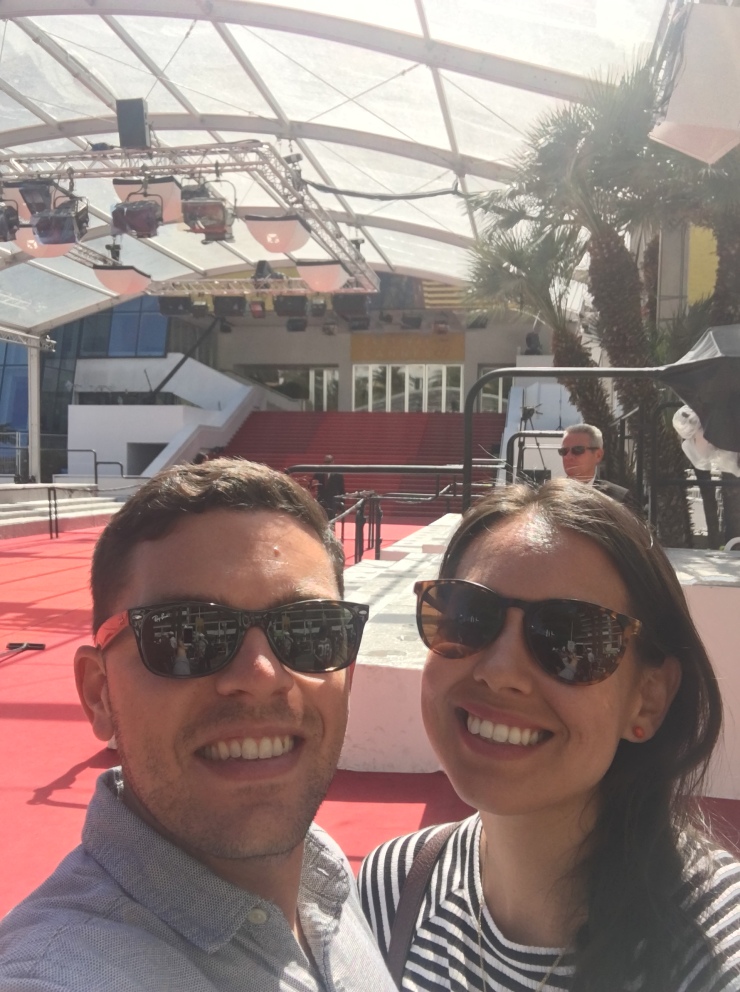 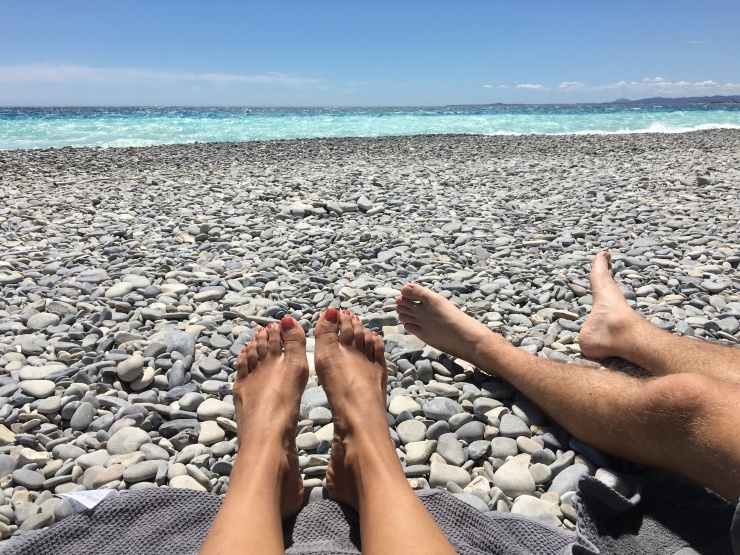 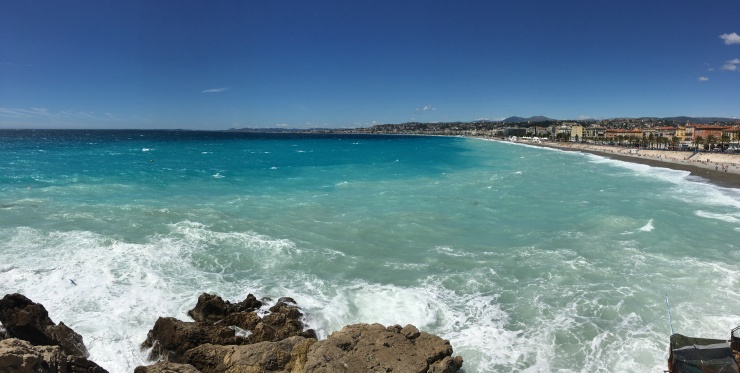 For an even better view of the town and surrounding Alps we headed to the Colline du Chateau, the home of the former Chateau du Nice in Old Town. All that remains of the actual chateau are some ruins, but they’ve turned the grounds into a cool park with lots of space and panoramic views of the city. It was also not windy at all, no sir… 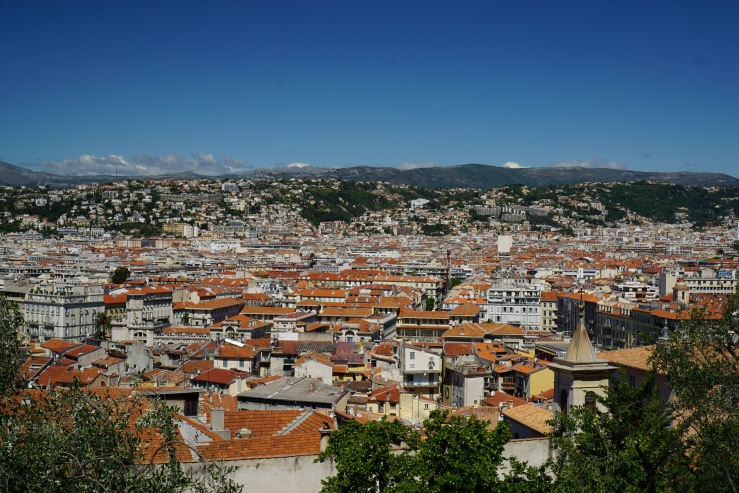 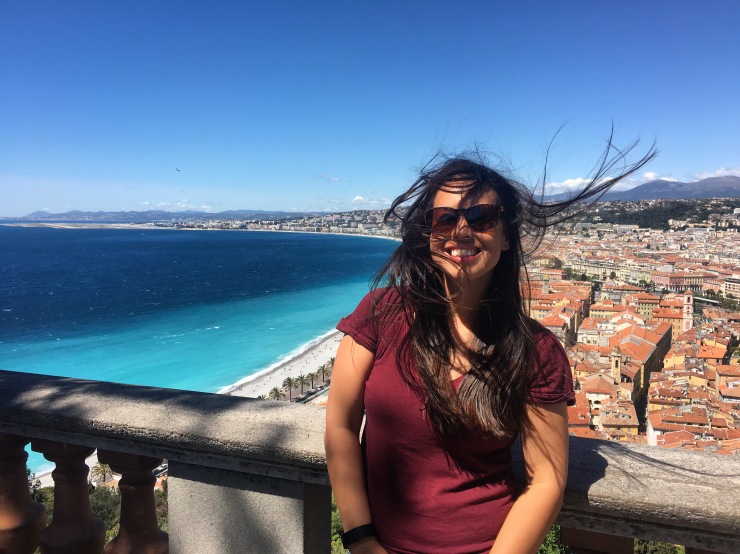 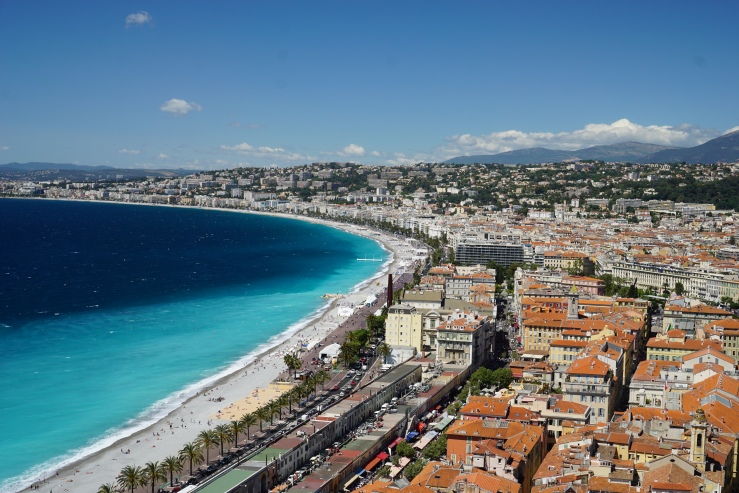 The beach was nice and all, but I crave mountains so we decided to do another day trip to what the internet describes as “the Grand Canyon of France”- -the Gorge du Verdon. We rented a little Fiat 500 and drove about 2.5 hours northwest through some great, unexpected scenery, eventually ending in the gorge for some kayaking. It was the middle of the week and we pretty much had the place to ourselves! We packed a lunch, ate on the water, and got our arm day in. 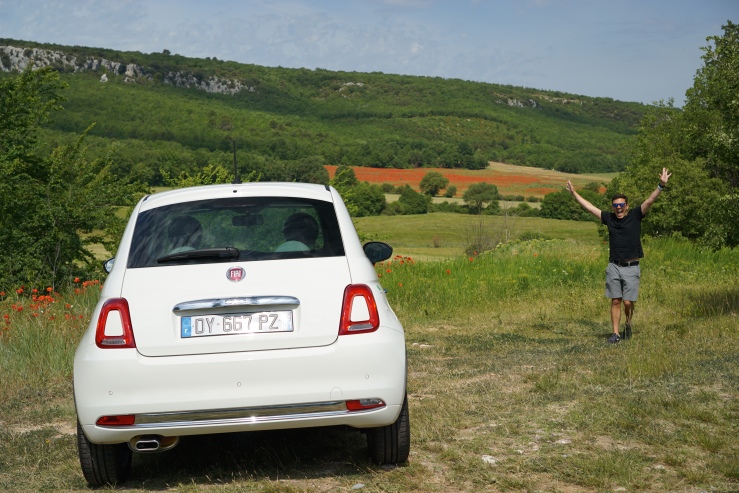 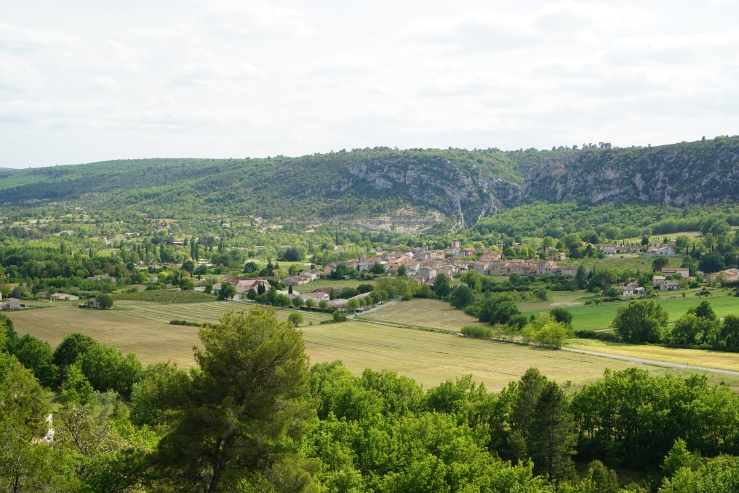 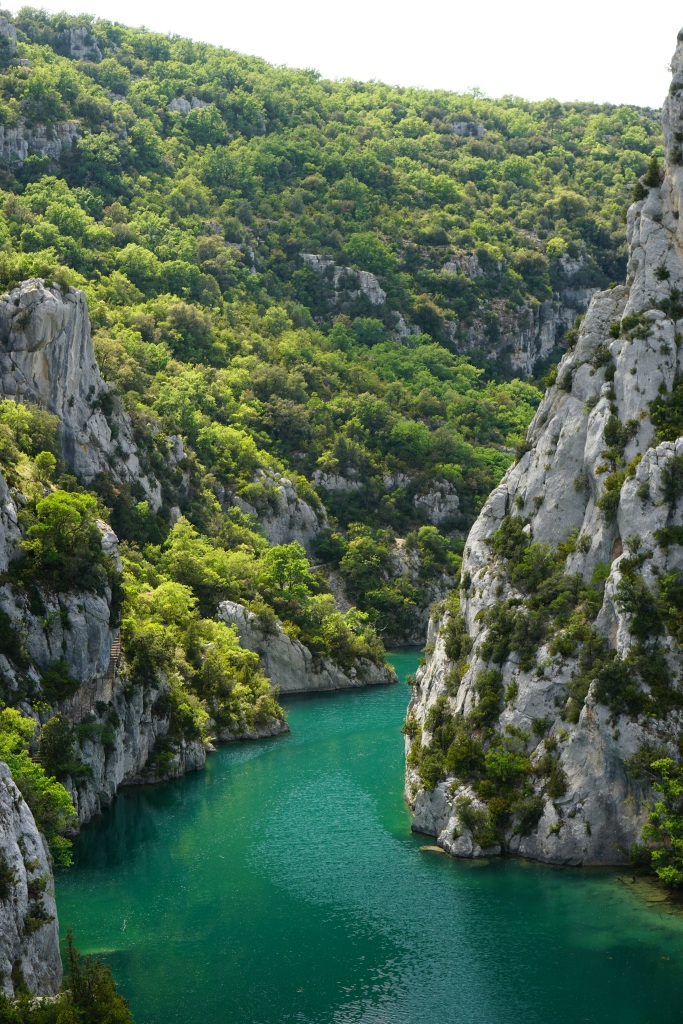 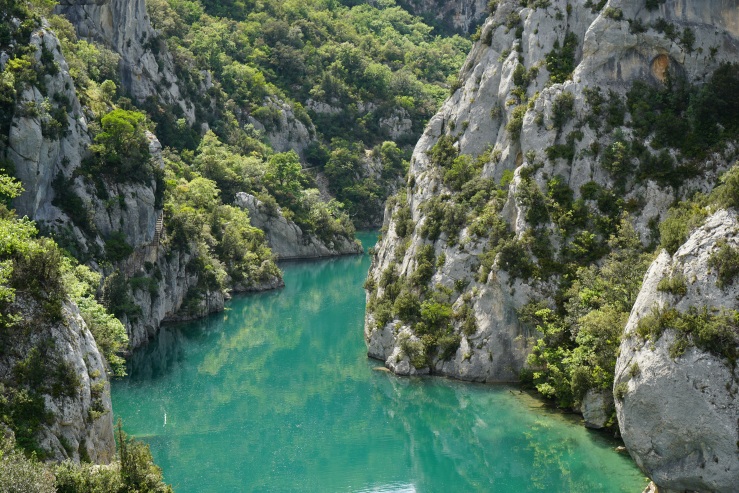 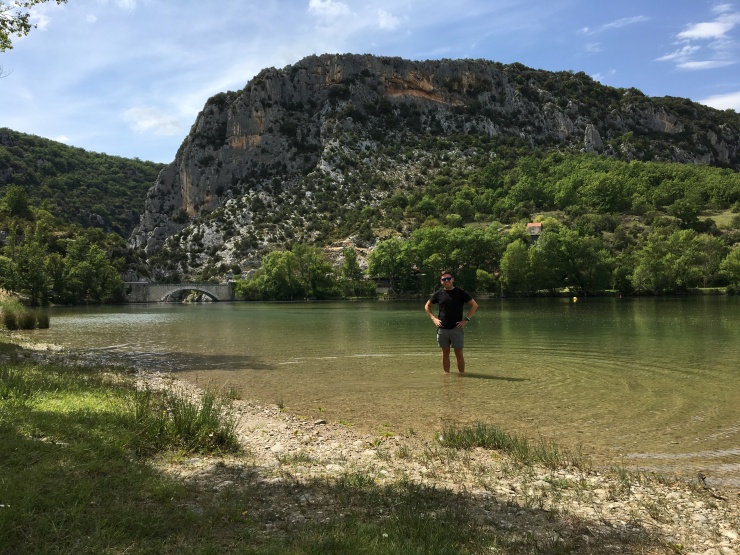 As if driving 5 hours plus kayaking another 3 wasn’t enough, we made the most of our rental car and spontaneously headed to Monaco to try and drive the track. It’s a street course so they reopen the roads in the evening, so we went for it. SUCCESS! We drove a section of the track, plus some bonus track that I’m 85% certain we weren’t supposed to be on but whatever (not pictured but we have video teehee)! Here’s some of the clearly sanctioned track. After about 6.5 hours of driving and a French gas shortage (buy electric, people), we finally made it home and passed the heck out. 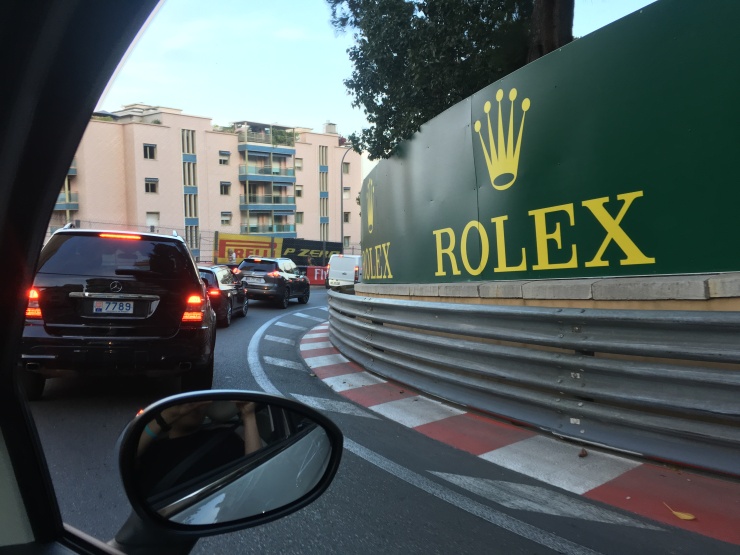 ……Only to awake a couple hours later to watch the Sharks SLAY in game 6 of the Western Conference final. We’ve been waking up between 2 and 4AM for every single game and watching on our laptop but it has been so so so worth it. Here’s the moment the clock ticked down, and reality set in. We’re going to the cup!!! #FINISHPITT 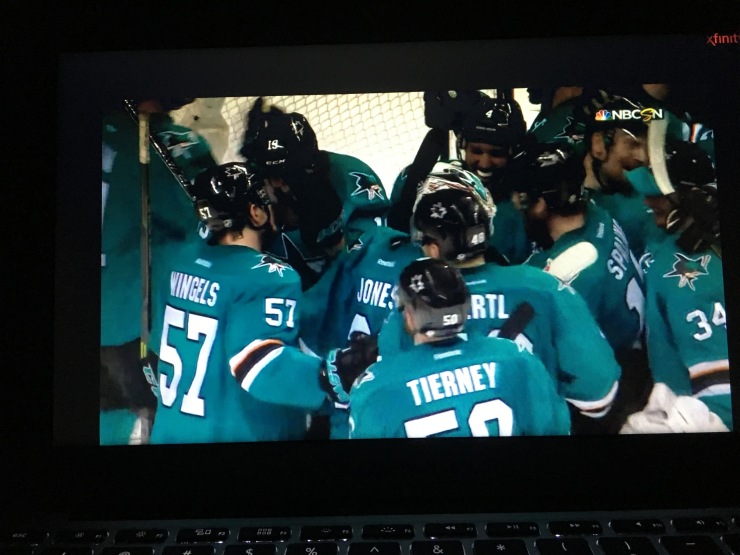 The next few days were pretty low key, filled with reading, meditation, duolingo (French), intentional planning, blogging, and just hanging out together. It’s been really fun traveling with Ted; we’re great travel partners and work well together in foreign situations, which is nice. We wandered around Nice and found the most awesome plaza ever- -one we’ve dubbed the “Puddle Plaza”. Basically, it’s a huuuge rectanglular plaza covered in about 2″ of water to walk around in and cool yourself off on a hot day. Imagine a huge, recirculated, rectangular kiddie pool. I actually haven’t bothered to look up the real name since it can’t possibly be better than Puddle Plaza. A few other shots around town, too. 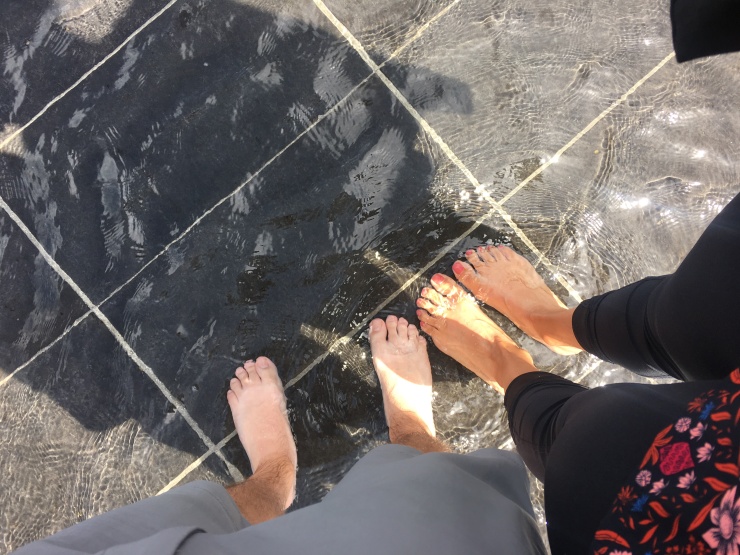 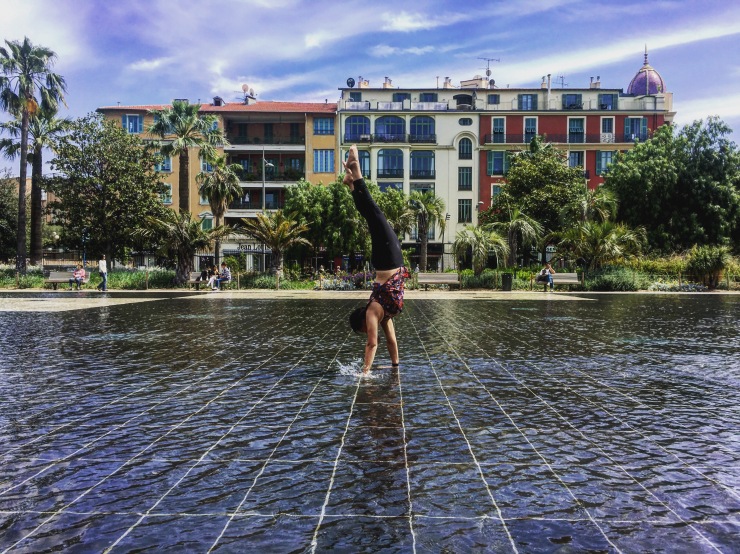 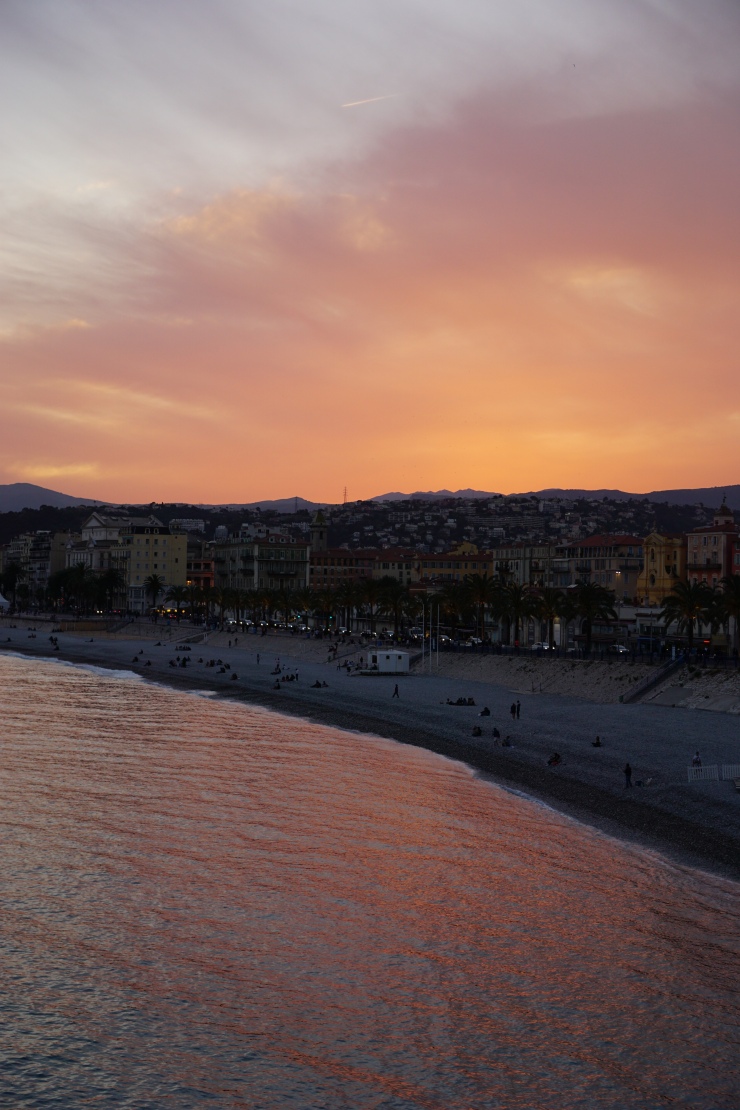 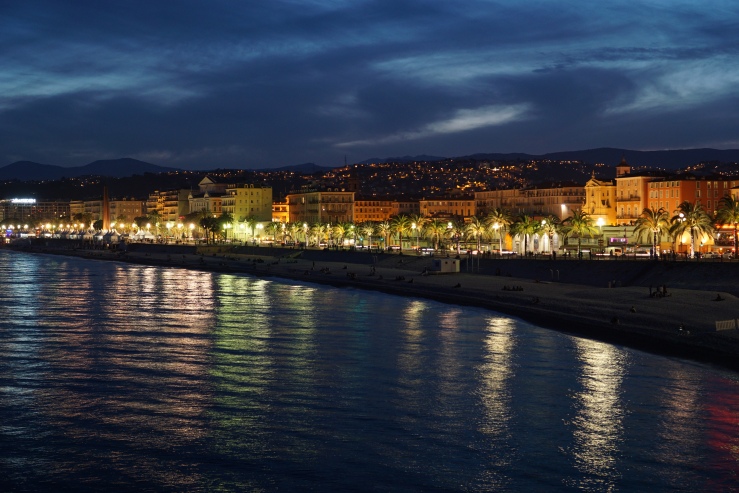 On Saturday, we headed into Monaco for F1 practice and qualifying. Qualifying is especially fun/important for the Monaco circuit and tickets to actual race day are extremely expensive. It was incredible to see and hear F1 cars a few feet from your face, and our corner had some excitement as well. All in all, a great day and cool experience. For actual race day, we watched at a local sports bar complete with real nachos as it poured outside. 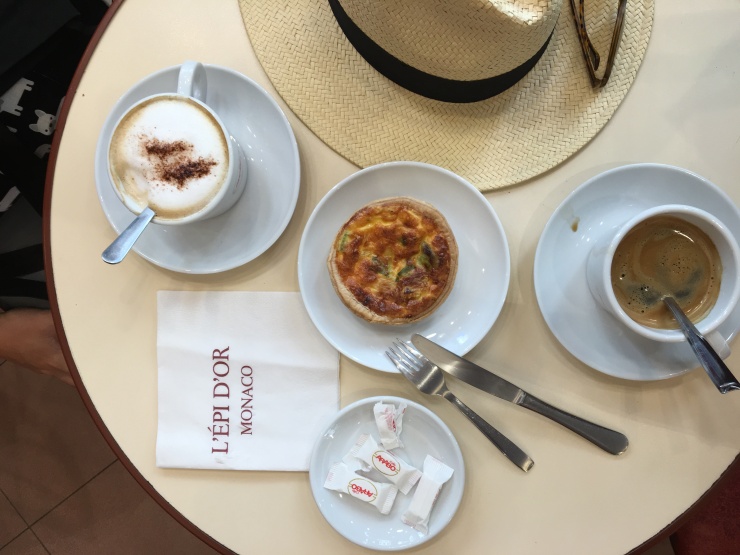 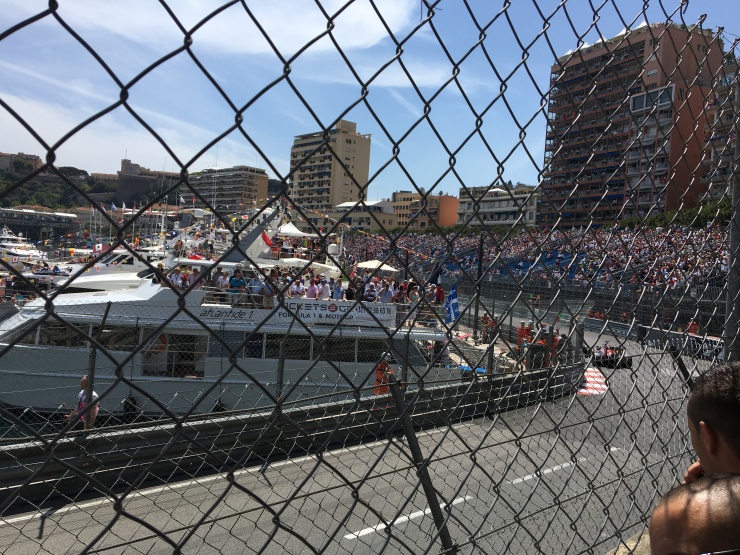 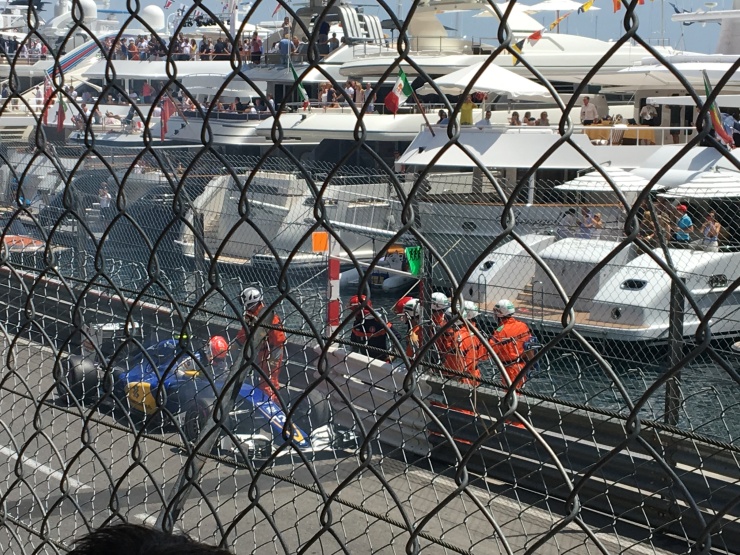 Today was another windy one, but we still had fun. We went roller blading on the Promenade des Anglais, the Nice version of the embarcadero I guess, and enjoyed the huge waves which is pretty uncommon. As an avid rollerblader in my youth, it’s good to know I still got some tricks up the ‘ole sleeve. 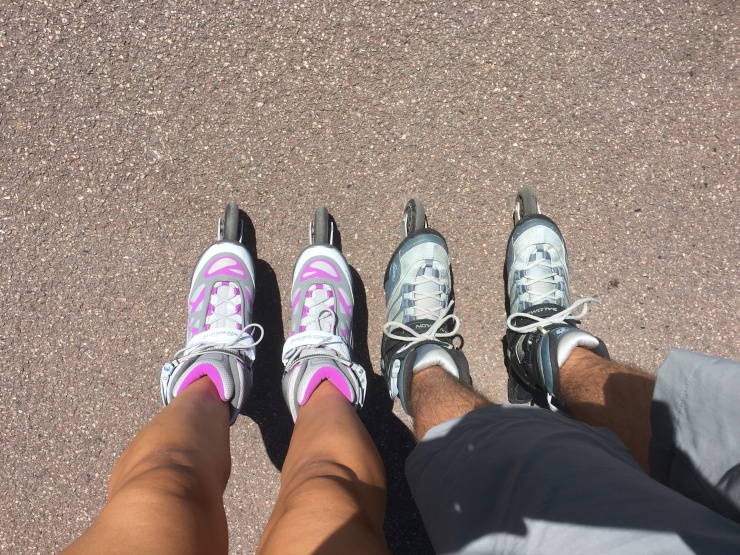 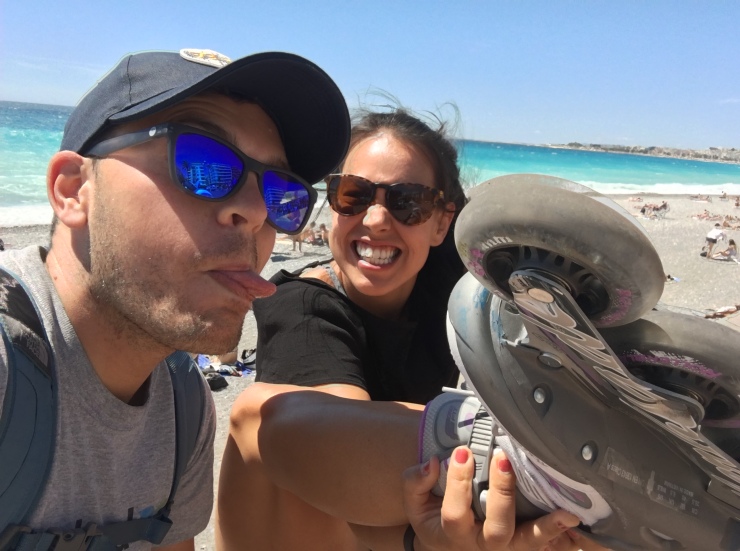 But just when I felt cool about myself, there was this. So, I guess I’m back to the drawing board. 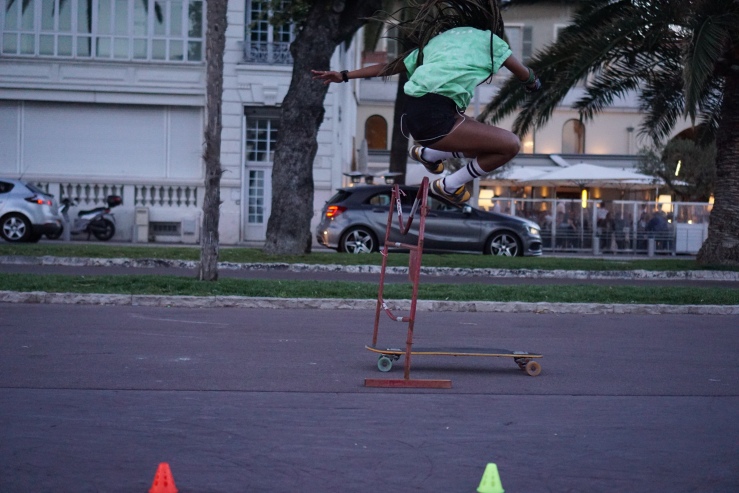 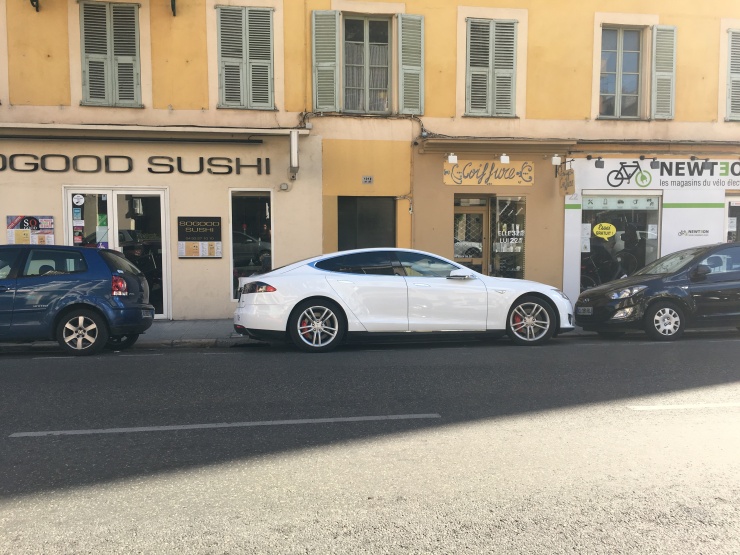 Off to Florence tomorrow but before that, we will be waking up again at 2am local time for Game 1 of the STANLEY CUP FINALS!!! GO SHARKS!

Importantly, it’s Memorial Day back home and it’s paramount to recognize those who have fought for our country so that traveling freely around the world and coming home to a safe country is a privilege I can enjoy. For those who serve, have served, and will serve, I thank you.

Posted from: Our AirBnB on Rue Barla in Nice, France